Jhené Aiko returned to Detroit on June 9 to perform at Chene Park for their Summer Weekends event. Unlike many of her performances in more intimate settings the venue held 6,000 (5,000 seats and 1,000 in lawn spaces) and every spot seemed to be filled.

Due to a delay with transportation I missed Yuna and Ro James who were the opening acts. However, I arrived just as Jhené was taking the plant adorned stage. Dressed in an all white pants outfit she started her performance with the intro from her latest album Trip, which was released in September 2017.

From there the Neo-Soul, R&B singer gave us a few of her throwback tracks and songs she was featured on with other artists such as Drake (“From Time”) and Omarion (“Post to Be”). She sang, danced, told us stories and even spit a couple bars for us when she performed her song “Stay Ready” from her EP Sail Out. The song features Kendrick Lamar, who in his usual sure fire way, gives a verse about the sweetness of a relationship. Because Lamar wasn’t there Jhené executed it like it was her own.

The show was carried out seamlessly only pausing for a moment when Ms. Aiko stopped to do a “boob check” asking (assumably) her stylist to make sure she wasn’t having an outfit malfunction. Something that actually had been a problem when she performed here at the Big Show at the Joe a few years back.

As the show was closing, like many in the crowd, I held my breath hoping for a surprise appearance from Detroit’s own Big Sean. Sean, a rapper and G.O.O.D Music artist is also the boyfriend of Jhené. We did not leave disappointed. Sure enough Sean came out and performed two songs with Jhené. Overall, the concert was very chill and enjoyable. Jhené seemed to connect with everyone in the crowd and it was all good vibes. 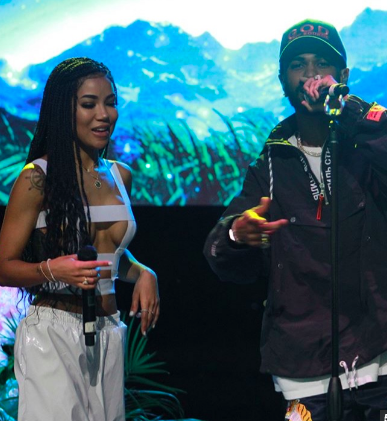 If you aren’t familiar with her music and you’re looking for music you can just sit back and maybe smoke one to (if that’s your thing) you should definitely look her up. Jhené is a genuine artist who gives you her all on every track. I recommend starting with her EP Sail Out and listening up to her last album Trip. It all flows together and your time will not be wasted.